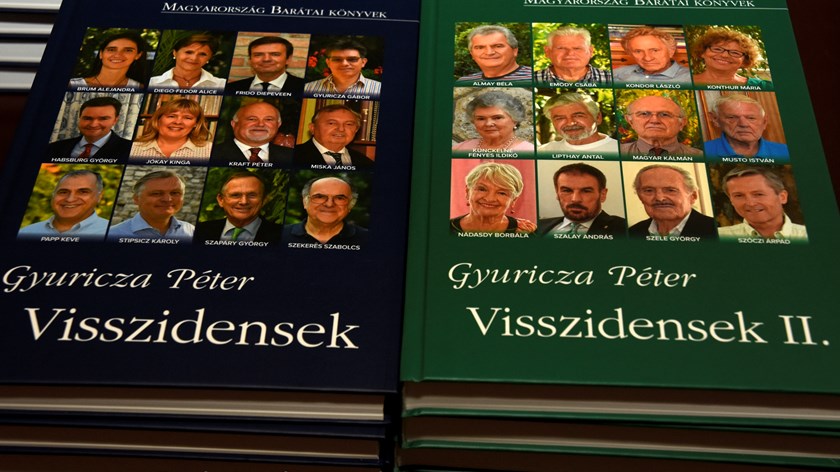 Following the success of the first volume of his book ‘Remigrates’ (Visszidensek), Hungarian journalist Péter Gyuricza has interviewed another twelve Hungarian people who decided to return home despite leaving the country decades ago. ‘Remigrates’ presents their life and work both abroad and at home.

Just as the first volume, the second book has been published under the patronage of the Friends of Hungary Foundation. At the book presentation yesterday evening, E. Sylvester Vizi, Chair of the Board of Trustees of the foundation, stressed that the remigrates included in the book are all friends of Hungary who dearly love their country because “patriotism does not depend on the place we reside; it lives in the mother tongue.”

“What did emigration do for the country?”

Sándor Lezsák, poet and vice-president of the National Assembly, answers this question in the preface of the second Remigrates book:

Under the Soviet regime, while you were the captives of Rákosi and Kádár, we did not fail you in the free world. (…) National emigration served the Hungarian cause throughout the world.

The book itself presents a far more detailed answer to the aforementioned question via the 12 interviews conducted by journalist Péter Gyuricza.

Vizi emphasized that remigrates are connected not only by their mother tongue, but also by a shared appreciation for folk music and folk dance. For some, these cultural traditions were the strongest connection they had to their Hungarian identities while abroad.

The former president of the Hungarian Academy of Sciences also pointed out that Hungarians have always been inclusive. As an example, he cited the many Dutch and German people who have moved to Hungary in recent years. Vizi added that the number of foreign members in the Friends of Hungary Foundation has continued to increase.

Deputy State Secretary for Cultural Affairs, Anikó Herter Krucsai, said that conversations are primarily focused on emigration and the experiences of those who return to Hungary are often left undiscussed.

Sometimes it requires more courage to come home than it does to leave, as such decisions are often led by the heart.

At the presentation, author Péter Gyuricza said that the publication of the book’s first volume spurred a kind of movement: remigrates regularly meet with one another on the first Friday of every month and several have even contacted Gyuricza to share their stories.

The journalist thanked the Friends of Hungary Foundation and the State Secretariat for National Policy for supporting the publication of the book and then continued the evening by sharing details of the lives of the remigrates.

Béla Almay, a Brazil-born Hungarian raised in Sweden and Csaba Renzo Emődy, the leader of the River Plate Argentine football team, along with László Kondor, a photographer of both the Vietnam War and the legendary Mayor of Chicago, were among those interviewed. The book also includes interviews with Mária Konthur, who fled Ceausescu’s Romania in the 70s while on a group trip with her husband; Ildikó Fényes Kunckel, who despite never attending a Hungarian school, was taught the language by her parents while abroad; Antal Lipthay, who emigrated to Chile with his parents in 1949, and has since built a Saint Anthony pilgrimage road near to his hometown of Benczúrfalva, and Kálmán Magyar, who lived in the United States and held Hungarian folk dance classes during the weekends.

István Musto has lived in Passau and Madrid, and although he could continue to reside in either, he has still chosen to spend his days in Budapest: “I do not regret it; the city is beautiful and liveable.” Actress, ballet master, writer and descendant of the historic Nádasdy family, Borbála Nádasdy, and András Szalay, whose Hungarian identity was preserved due to his parent’s hard work and the assistance of Hungarian schools and the scout movement, feel the same. Gyuricza spoke with György Szele, a physician who fled to America for his involvement in the 1956 Revolution, and Toronto born Árpád Szőczi. Szőczi works as a journalist and documentary director and splits his time between two countries: Hungary and Germany.

By sharing the stories of these 12 unique individuals, ‘Remigrates’ offers readers a meaningful look at the reality of Hungary in the 20th century.