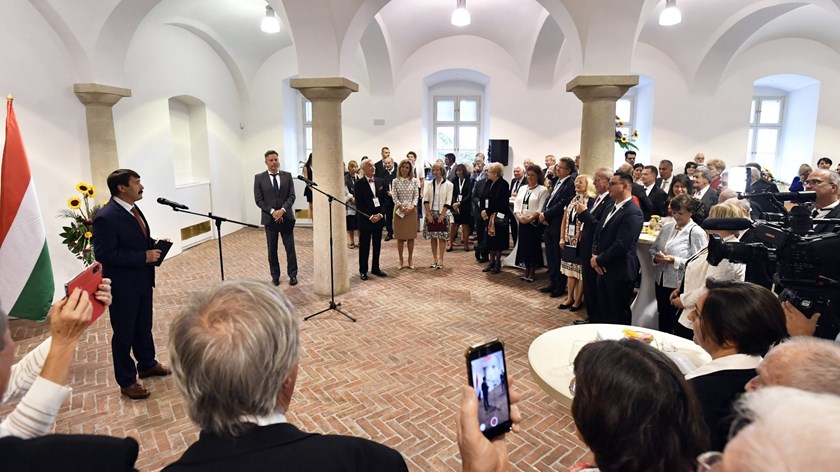 Those committed with a desire and the ability to do something for Hungary met at the VII annual conference of the Friends of Hungary Foundation, which is celebrating its 10th anniversary. Over 200 people from more than 20 countries around the world came to Budapest to meet with each other, as well as with President János Áder and Prime Minister Viktor Orbán.

“The time of miracles is over, but there is enough miraculous power within man; what has reason and a firm will not already accomplished?,” quoted Ferenc Deák, “The Wise Man of the Nation” and Minister of Justice during the 1848 revolution, János Áder, who with his wife, Anita Herczegh, received the members of the Friends of Hungary Foundation at their seventh annual conference at the Sándor Palace on Friday, after their visit to the American, British, German, and Austrian embassies.

Hungary’s President praised the foundation, stressing that its members prove through their actions that they are friends of Hungary and that each and every one of them contributes to the creation of a credible, fair, and faithful image of our country to the world. When the commitment, sense of responsibility, and deeds of each individual add up, when they think together and make their voices heard together, the greatest achievements are the result,” the Head of State stressed.

“The amount of educated people is the true power of a nation,” the Chair of the Foundation’s Board of Trustees, E. Sylvester Vizi quoted István Széchenyi, “the Greatest Hungarian,” drawing attention to the opinion-forming power of the members and the weight of their statements, as they are among those who speak out when the country is “unfairly spoken ill of in the world.” He added that the foundation, celebrating its 10th anniversary this year, is an icon for the 2.5 million Hungarians living in the diaspora outside the Carpathian Basin, and the work of its members is incredibly important.

He thanked the Head of State for welcoming them again at his residence, and the members present for the hundreds of people who braved the cold to travel to Hungary. E. Sylvester Vizi stressed that the World Eucharistic Congress in early September, at which President János Áder also professed his faith, was proof that Hungary has a cultural tradition dating back two thousand years.

After the Chair of the Friends of Hungary Foundation’s Board of Trustees, Zsuzsanna Dreisziger Stricz, Vice President of the Americans for Hungarians Foundation and Co-Chair of the American Hungarian Federation, thanked the Head of State for establishing the István Regőczy Foundation with his wife to help COVID orphans, and called on all present to support the cause.

After the visit to the Head of State, the members of the foundation went to the newly renovated Riding Stables, where the captain of Buda Castle, Gergely Fodor, spoke to the audience about its renovation, after which they listened to the appreciation of President E. Sylvester Vizi and the speech of Prime Minister Viktor Orbán, which was not open to the press. The evening ended with a presentation of creations by Hungarian fashion designer, Katalin Hampel.

On the second day of the conference, two Fidesz MEPs, Kinga Gál and László Trócsányi among others, gave presentations on current European political issues. They presented the Friend of Hungary Awards to Anikó Gáal-Schott, who has been promoting Hungary and Hungarian interests in the United States and other international forums for decades as a “bridge between Hungary and the Washington region;” and Zsuzsánna Haynalné Kesserű, a journalist who helps Hungarians in Argentina to preserve their Hungarian identity; as well as the Europa Club in Vienna, founded by young people who emigrated after the 1956 revolution.

“In Europe, certain forces want to undermine sovereignty, national self-esteem, and the family as the forces that keep the individual alive with a great final attack,” said Fidesz MEP Kinga Gál.

“We are at a key moment, a time of a gigantic duel between good and evil,” said the Fidesz politician. The mainstream, she said, is undermining fundamental values such as nation, religion, and family. Europe is characterized by a moral crisis and a lack of tolerance towards those who think differently, those who do not belong to the mainstream.

Referring to the demographic crisis, she said that Europe is now a continent of empty cradles. Some see immigrants as the solution, but this would mean a change of identity, which “we would like to avoid” and we would like to see policies that support families and strengthen national identities.

According to Gál, the commission regularly invokes a lack of competence in cases of infringements affecting national minorities (as it did, for example, in the case of the Minority SafePack European citizens’ initiative, despite the more than 1 million signatures collected), but in the case of Hungary it feels competent to act, for example, to override the “Child Protection Act.”

However, despite the commission’s rejection of the Minority SafePack citizens’ initiative, the campaign had a positive effect: it showed the “Hungarian national unity’s boundless strength.” Afterward, the Fidesz politician praised the decisions of the Orbán administration, including the Constitution and the simplified naturalization procedure, thanks to which “it has become accepted that without a nation there is no homeland, and without Hungarians abroad there is no nation.” Finally, Gál reminded the audience of their responsibility to return to their own communities and “help our small country and our great nation to prosper.”

Migration, identity crisis, an epidemic, Brexit – among other topics, MEP László Trócsányi gave a presentation on these issues which are currently affecting the European Union. The former Minister of Justice compared the historical experiences of Western and Central European countries and partly explained the conflicts within the European Union. Trócsányi also stressed that the Hungarian government firmly rejects centralization efforts within the EU. “The EU is in Crisis, Problems are Growing, but I Believe in Europe”, he said.

The Fidesz MEP recalled the year 2004 when Hungary joined the European Union, and as Hungarian Ambassador to France, he celebrated this in Paris. “It was a nice evening, but there was one problem: the ambassadors of the 15 countries who were already members of the community, did not celebrate with us, they were not present. And later came the slaps. Not for Hungary, for Europe,” the politician stressed.

Trócsányi then reviewed the crises of recent years. First, the rejection of the European Constitutional Treaty, then the Greek crisis, when the eurozone faltered. Later, he said that “Europe has been unable to deal with migration”. He said there was complete division and confusion in people’s minds. To this, the former minister said, Central Europe “due to its historical origins, reacted differently from Western European countries.” The next crisis was Brexit, followed shortly afterward by the coronavirus epidemic on the continent.

“The European Parliament was still talking about plans for the next 25-30 years when the coronavirus had already appeared in Europe- when people were already dying in Italy. And for a long time, there was not even a vaccine.”

Trócsányi then spoke at length about the identity crisis, which he said “wants to reassess historical events,” even though every country has a past, present, and future. “We are living in a union of past, present, and future” a unity which does not exist at the European level because “the past is confused – the Franco-German war has defined Europe’s problems for centuries, which means that we have no common past to be proud of.”

“A national constitution has something to say, the European treaty has nothing to say,” Trócsányi stressed, adding that “this is also the reason why you cannot impose “one way of thinking” on a continent of 500 million people.

As an example, he cited Hungary’s “traditional institutions: family and marriage, which have already been transformed in Western Europe. The difference is that we defend them as institutions, and they see them as a legal concept.

Migration is also an identity crisis. Some people see it as a labor force, while others say that we should go there to help and provide assistance.

At the same time, a kind of “centralization” has been taking place in Europe, with the European Parliament gaining more and more power and leaving less room for the European Commission.” In other words, the fate of the European Union is becoming a party political issue. This would be served by the so-called “transnational list,” to which Hungary “naturally objects,” as it does to the vision of a United States of Europe. In his view, the competitiveness of Europe should be the first priority, as well as the “green transition.” But the latter should not be at the expense of the central European states. 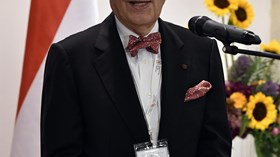