Hungary's Order of Merit went to German Professor Reinhard Olt: "For me, this is the greatest thing I have received so far". 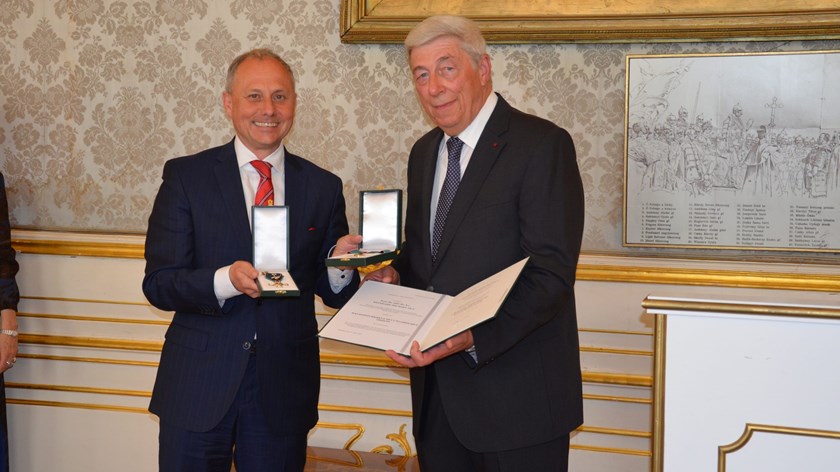 Every year on the National Day, March 15, the President of the Republic awards the Hungarian Order of Merit. The ceremony took place COVID-conditionally not as usual in the parliament building, but at the Hungarian embassy in Vienna and only one year later after the award. Reinhard Michael Olt, member of the Friends of Hungary Foundation, who was also awarded the "Friend of Hungary Award" in 2017, said in his speech: He felt deeply touched when he learned that he had been awarded the Hungarian Order.

27 years at the Frankfurter Allgemeine Zeitung and a certain time also in political reporting on Hungary - this is how Reinhard Olt's personal history with our country began. He has also specialized in minority politics, about which he recently even wrote the book "In the Carpathian Arc" (published by the "Friends of Hungary" Foundation).

The Germanist, historian, political scientist, publicist, former lecturer at the Andrássy Gyula University of Budapest, former visiting professor at the Eötvös Lóránd University of Budapest received the Hungarian Order of Merit in 2021. In 2017, Olt was awarded the "Friend of Hungary Award," which is given to individuals who, among other things, work to improve the representation of Hungary.

"We are very pleased to be here today and to have the opportunity to meet Professor Olt in person. The pandemic is not over yet and on top of that there is war next to us. One of the greatest tests of Europe's strength since World War II, the Russian war of aggression against Ukraine. But we have this opportunity to meet with each other here, thanks to your invitation, Mr. Ambassador, for which I would like to thank you now."

Vizi praised Olt's work so far, stressing that it has done much to improve Hungary's reputation in the world, which is in line with the goals of the Friends of Hungary Foundation.

"We want justice for Hungary! We want to get more understanding that our love for the homeland is not nationalism, it is just a passionate patriotism that stems from our history."

He also spoke about the foundation, which was established in 2011.

"The Friends of Hungary Foundation was established with the aim to inform the foreign Hungarian organizations and the Friends of Hungary all over the world, the public, about the events from Hungary and to correct the one-sided account about us and the false reports of some media organs, which can be read in the Western press, and to spread the truth, to make it understandable for everyone. In this work (activity) we have received a great help from Professor Olt. It is hoped that we will continue to enjoy his help in the future."

He stressed that no one has done so much for the minorities of Europe as Professor Olt and highlighted his work "In the Carpathian Arc", published by the Foundation "Friends of Hungary".

"It is a great pleasure for me to know among us friends and companions from Germany living in Vienna (...) Gratefully I enjoy all of us meeting in this traditional house, in occasion-bound solemn framework, and I thank Hungary, in particular its president János Áder, for this state award, but especially Prof. Vizi, to whom I owe it."

The honoree emphasized once again that he was deeply touched when he learned that he had been awarded the Hungarian Order. The award was ceremoniously presented by the Hungarian Ambassador Andor Nagy and by Anzelm Bárány, the Director of the Hungarian Cultural Institute Collegium Hungaricum Vienna.

After the ceremony, Professor Olt told "Ungarn Heute" exactly what the award means to him:

"For me, this is the biggest thing I have received so far at all. It also exceeds the Austrian Cross of Honor for Sciences and Arts. Especially because I always have to deal with people who are active in journalism and who write things about Hungary today that I just can't stand anymore and because I fought against it for years."

He also added that there is tunnel vision in journalism these days. "You only look in limited ways. You don't do research anymore. You only get things that others also write you stay nicely in the corridor and I can't stand that," he said. 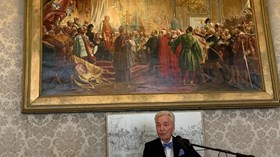 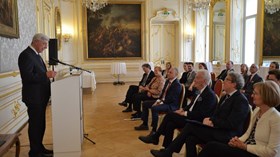