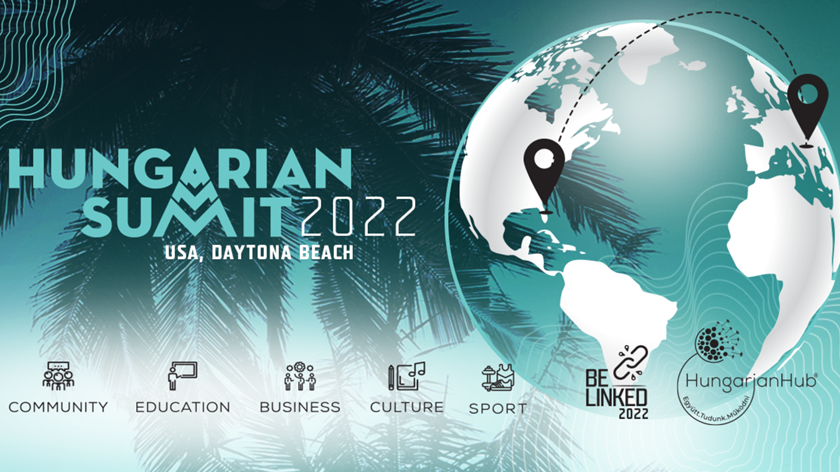 The first Hungarian Summit was held in Daytona Beach, Florida, on May 12-14 this year, organized by the non-profit organization HungarianHub.

The main goal of the three-day event was to "build bridges" between the two countries, focusing on five areas: Business, Education, Culture, Community and Sports.

On Thursday, the Hungarian Summit opened with a grand opening ceremony in the imposing setting of MOAS (Museum of Arts and Sciences), which featured a video message alongside the event's speakers, including Hungarian Ambassador to Washington Szabolcs Takács, Prime Minister's Envoy Dr. Katalin Szili, and three-time Olympic water polo captain Dénes Kemény.

On the U.S. side, public dignitaries present at the opening ceremony included Tom A. Wright, senator from Florida's District 14, and Volusia County Councilman Billie Wheeler.

An event in Daytona Beach, the birthplace of NASCAR, would not be complete without the presence of the racing series: At the Hungarian Summit, Jordan Jiloty, NASCAR director of government relations and community affairs, welcomed the gathering.

Led by István Jakab, vice president of the Hungarian Parliament, leaders of Hungary's diaspora communities expressed their togetherness by symbolically pouring wheat together as part of the "Bread of Hungarians - 15 Million Grains of Wheat" program launched in 2011.

From the business side, guests such as David Cornstein, former U.S. Ambassador to Budapest, and Anikó Kubatov, Commercial Attaché, shared their thoughts and experiences. At the end of the first day, a cooperation agreement was signed thanks to AmHunCham and HunBizFlo.

In his opening speech, Krisztián Kölkedi, deputy CEO of Innovation Express Agency, made it clear that the U.S. market is a great opportunity for Hungarian startups, but that it is important to understand the specifics of the market and that the Hungarian Summit can be of great help in this regard.

In the field of higher education, several Hungarian institutions were represented in Daytona Beach, but Dr. Zoltán Dubéczi, Secretary General of the Hungarian Rectors' Conference, also came to the event. According to Dr. Tamás Novák, Attaché of the Consulate General of Hungary in New York, many more events of this kind are needed, as education is an area where there is still amazing potential to be tapped.

On behalf of the Tempus Foundation, Gábor Dobos, Director of Study in Hungary, traveled to Daytona Beach to present the Diaspora Higher Education Scholarship Program.

Gergely Böszörményi-Nagy, president of the Foundation for the Moholy-Nagy University of the Arts, arrived in Florida with representatives from other Hungarian higher education institutions to seek opportunities for collaboration in the United States. The interest in scholarship programs at the Higher Education Fair on Saturday showed that there is a demand for this type of event.

The Hungarian Summit was also an excellent opportunity for leaders of Hungarian diaspora organizations to review recent events and agree on the way forward. According to Andrea Lauer Rice, President of the Hungarian American Coalition, it was a good opportunity to re-align the joint work.

Dr. Judit Trunkos summarized the work in the field of sports and mentioned as the main goal to find out more about the further education of young athletes in the USA. Top athletes who have already studied in the U.S. (Petra Újhelyi - basketball, István Batházi - swimming) and Miklós Gór-Nagy, former world champion in water polo and currently working as foreign trade attaché in New York, also shared their experiences on this topic.

On Friday, the program continued with workshops and field trips, including a visit to the University of Central Florida's Entrepreneurship Center.

In the evening, the audience was entertained with a contemporary opera-ballet production and a popular performance by Vujity Tvtrko.

On Saturday, the Hungarian Summit program was all about culture and entertainment, with Hungarian artisans, art exhibits, film screenings, panel discussions, children's programs and concerts.

The documentary Memory Project was represented by its producer Andrea Lauer Rice and the highly successful Toxicoma Cinema by its director Gábor Herendi.

The official program of the Hungarian Summit ended with two wonderful concerts. The University of Pécs Choir and violin virtuoso Bernadett Nyári showed why she is one of the world's leading artists in her field.

Piros Pazaurek, the founder of HungarianHub, the organizer of the Hungarian Summit and Honorary Consul of Hungary, expressed her satisfaction at the end of the event that the first Summit had met - and in many ways exceeded - expectations and that long-term successful relationships had already been established on the first day.

Moreover, the sold-out event provided an opportunity for Hungarians to reconnect a bit after the coronavirus pandemic and to rediscover the meaning of the slogan HungarianHub for themselves:

TOGETHER. WE. CAN. WORK.

Based on the feedback, Pazaurek said she believes a continuation of the very successful Hungarian Summit is necessary.

The official photos of the Hungarian Summit can be found here.