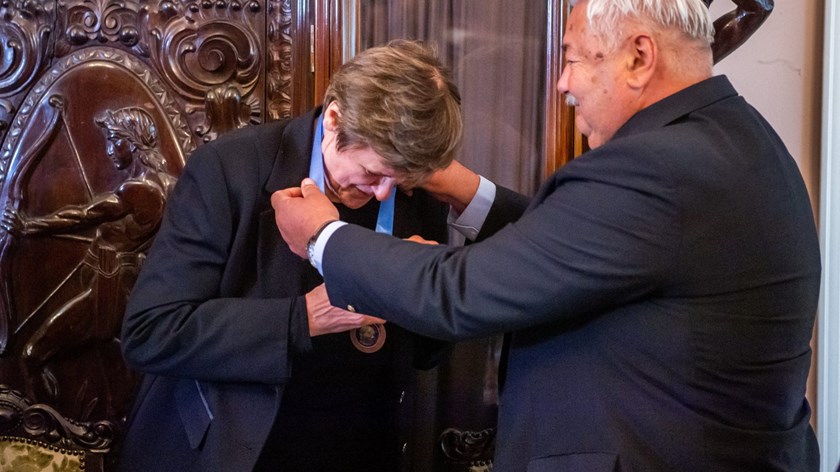 István Bajkai, a representative of Fidesz in the National Assembly, gave Karikó the award, saying in his speech that Karikó is now in the footsteps of the other greats of Hungary’s healthcare history; Ignác Semmelweis, Pál Heim, and Albert Szent-Györgyi.

The Council of Human Dignity awards its medal to individuals who, in addition to their professional activities, have made a significant contribution to public life. It was founded in 2010, and has since then played an important role in executing public service needs for the community on a national and international level. One of its founders was Nobel Prize winning chemist György Oláh, who was also one of the founders of the Friends of Hungary Foundation.

It was extremely difficult for Karikó to receive funding or support for her research in pioneering the use of messenger ribonucleic acid (mRNA) as a therapeutic technology, since most academics at the time were either convinced that it could not be done, or simply did not pay attention to it.

In fact, Pennsylvania University, where she was working in the 1990s, warned her that if she did not stop her research in mRNA technology, she would lose her faculty position and face a severe pay cut.

Despite already not receiving funding and being diagnosed with cancer, Karikó chose to push on, which, as we can see today, paid off not only for her but for the entire world. Had she decided to accept the easy route of giving up her research, the Pfizer-BioNTech vaccine might not exist today.

Currently One of the Most Well-Known Hungarians

Zoltán Lomnici Senior, president of the Council of Human Dignity, emphasized that Karikó is currently one of the most well-known Hungarians in the world, and that she gave humanity hope in terrible times.

Lomnici said human dignity is even more important these days when the world is still struggling against the coronavirus. “Unfortunately, a global pandemic needed to occur in order for us to understand the importance of the work of scientists,” he said.

Miklós Szunai, secretary general of the Council, said that very many people around the world can thank Karikó for very much. He said that “with her whole life, her scientific achievements, and her patriotism, she is worthy to be a role-model.”

In her acceptance speech, Karikó emphasized that it is an honor for her to be placed among so many Hungarian greats in receiving this award. She stated that she has lived outside of Hungary for decades, but together with her family she has always remained Hungarian and raised her children as Hungarians, thanks to which all of them will always be willing to come to Hungary.