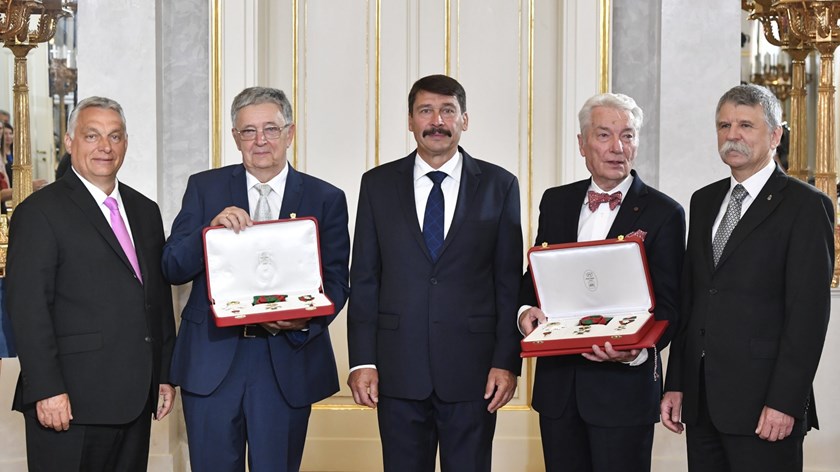 Professor E. Sylvester Vizi was awarded for his research on the central and peripheral nervous system’s stimuli transmission, specifically the discovery of the brain’s analog communication system. His commendation not only stands for his outstanding discovery in the field which has made the future of medicine much brighter, but also for his years of work in bolstering the world’s understanding of science.

President János Áder announced that this year, the Hungarian Order of Saint Stephen is awarded to those who were the “worthy successors of Loránd Eötvös as presidents of the Hungarian Academy of Sciences,” E. Sylvester Vizi and László Lovász.

Speaking on E. Sylvester Vizi’s career, Áder turned all the way back to the Professor’s time at Oxford University, where his work was at first met with skepticism and denial. Nevertheless, Áder explained, E. Sylvester Vizi knew that “he who discovers is always at first alone. This is why he held on to his truth.”

Professor E. Sylvester Vizi’s work paid off, and his discovery led to a huge scientific breakthrough in neuroscience, proving that the brain’s nerves can communicate with each other from great distances, as if they were using radios.

With his work, Áder explained, the Professor continues to share the prestige of Hungarian Neuroscience with the world.

The President brought up E. Sylvester Vizi’s quote that “a scientist is never allowed to forget about the entire picture, even when he digs through a deep narrow channel in the pursuit of a solution.”

Professor E. Sylvester Vizi deserves gratitude, Áder said, for all he has done in the past years with regard to the knowledge hidden in those deep channels, but also “for always serving that which is shared, the public prosperity of his homeland.”

The President concluded with a quote from Loránd Eötvös:

“If we want to be true scientists and good Hungarians, then we need to lift the flag of science so high, that it can be seen even past the borders of our homeland, and given the respect it deserves.”

The Hungarian Order of Saint Stephen is awarded in recognition of the most outstanding, special merits, remarkable lifetime achievements, and significant international achievements in the service of Hungary.

Sylvester Vizi: In Service of the Publicum

Physician, neuroscientist, pharmacologist, and university professor, E. Sylvester Vizi, served as President of the Hungarian Academy of Sciences between 2002 and 2008, and is also the current Chair of the Board of Trustees of the Friends of Hungary Foundation.

In an interview with Kossuth Rádió, Professor E. Sylvester Vizi brought up the inscription on the award along the lines of publicum meritorum premium, service to the public good. Looking at those who have won it, he said, it is truly a great commendation and an honor to receive.

The Professor stated that the Hungarian Academy of Science has done a lot for the public good over the past two centuries. He feels that by receiving the Order of Saint Stephen award, the elite body of Hungarian science is also a part of that praise.

The Professor explained that of all the natural sciences, the study of medicine is the most in touch with human nature, as everyday a doctor gives something to another person, “trying to give them the opportunity to return to their everyday life, thus giving.”

“And to give, especially to give something good, is the greatest recognition one can receive if they are successful in doing so. It is possibly not an accident that medicine chose me or that I chose medicine, but it is certainly clear that when the results of my research are used around the world, and I am brought up in scientific literature, I feel that I was successful.”

“This feeling of success, Professor E. Sylvester Vizi explained, is very important for everyone, since it is the motivating factor “which helps a person find the energy to keep working and to keep sharing their knowledge with others.”

László Lovász is an Abel Prize-winning mathematician, well-known for his work in the field of combinatorics. President Áder described him as having come from the Golden Team of Hungarian mathematics, among the pupils of Pál Erdős.

Not only was Lovász commended for his years of contributions in mathematics and computer science, but for his enthusiastic participation in education as an effective teacher, an inspiring presenter, and a responsible leader all the way from Budapest to Ohio.

In his interview with Kossuth Rádió, Lovász stated that he was given an excellent education in Hungary which prepared him for a scientific career, and it feels good to now be commended for the service he has given back to the community through research, international projects, and education.

Lovász emphasized that mathematics is crucial in understanding our world, how we can understand statistics, epidemic information, economic trends, “how we can imagine what science is capable and incapable of achieving. Because if we do not reach this not only anti-mathematic sentiment but anti-science sentiment develops.”

A Long Line of Hungarian Greats

After economist and central banker Sándor Lámfalussy (Alexandre Lamfalussy), widely considered a founding father of the Euro, and renowned opera singer, dramatic soprano, Éva Marton, Professor Vizi is the third founder of the Friends of Hungary Foundation to receive the prestigious award.

The order is named after Hungary’s perhaps most famous king, Stephen I, whose reign nearly a thousand years ago was marked by his consolidation of the monarchy, the establishment of the medieval state of Hungary, and his adoption of Christianity as the state religion. The Order of Saint Stephen of Hungary was founded by  Maria Theresa, the Archduchess of Austria, the Queen of Hungary and Bohemia and the ruler of the Habsburg dominions in 1764. Empress Maria Teresa and her son, Emperor Joseph II, made several political concessions to ease tensions between Austria and Hungary, among them being the creation of the Order. Although the Order was terminated at the time of the proclamation of the Republic of Hungary in 1946, it was recreated in 2011 as the Hungarian Order of Saint Stephen, and to this day remains the highest order in Hungary. 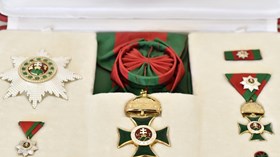 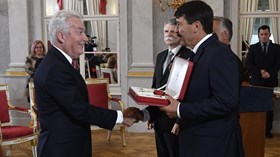 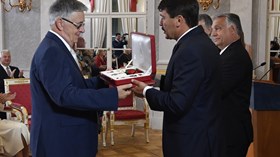