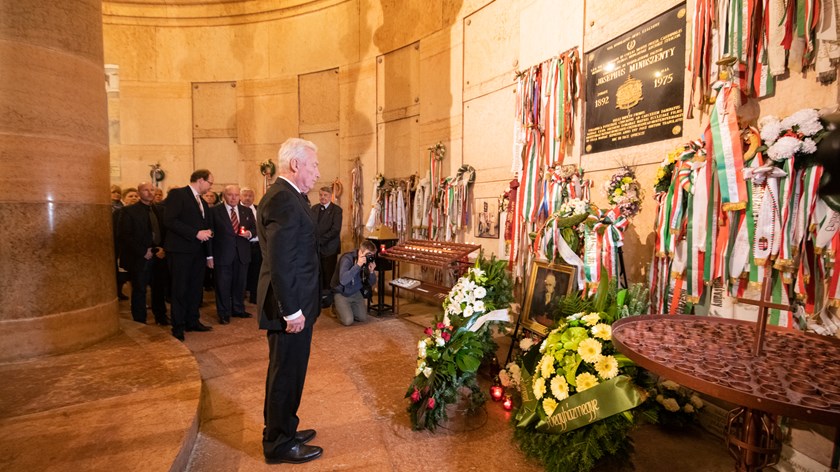 Members of the Friends of Hungary Foundation, from 29 different countries of the world, arrived in Esztergom to attend the mass held by Cardinal Péter Erdő offered to József Mindszenty, one-time archbishop of Budapest, and his beatification. Before the service, the cardinal greeted the near 150 guests from abroad emphasizing his joy that they can celebrate together. E. Sylvester Vizi, Chair of the Foundation’s Board of Trustees was present at the mass, along with Miklós Kásler, Minister of Human Resources, state secretaries Mariann Vízkelety and Pál Völner, and former constitutional judges. The diocese bishop of Nagyvárad (Oradea), László Böcskei, emphasized during his homily: the past cardinal was God’s gift to not only his time but for future generations as well.

“I ask those sitting here today, to not only pray for Cardinal Mindszenty’s beatification but to also follow his lead: love God and your fellow man!” – said Archbishop of Esztergom-Budapest Péter Erdő, before the final blessing, bidding farewell to those who partook in the Mindszenty pilgrimage mass in Esztergom.

Amongst them, almost 150 members of the Friends of Hungary Foundation who arrived from 29 different countries to the Primatial Basilica of the Blessed Virgin Mary Assumed Into Heaven and St Adalbert.

László Böcskei, Nagyvárad’s diocese bishop, spoke of Mindszenty in his homily: history is composed of not just phases, but also individuals. Individuals who are shining lights, fighting the battle against the darkness. This was Cardinal József Mindszenty.

The bishop added: Mindszenty had a touching and tragic life; his consistency, his love of the profession served the church and his people.”

At the mass, two members of the Friends of Hungary Community, Father László Csicsó from London and Father László Németh from Rome, concelebrated in the mass and one of the acolytes was a member of the Community as well.

After the service, E. Sylvester Vizi, the Chair of the Friends of Hungary Board of Trustees, and Cardinal Péter Erdő placed a wreath on József Mindszenty’s grave.

In the trial of József Mindszenty’s beatification, a huge development occurred in the form of Pope Francis acknowledging the heroic acts performed by the Cardinal in the name of Christian values.

Thus, the investigation of a miracle can soon begin, necessary for any beatification: a medically unexplained healing attributed to him awaits the Roman evaluation.